Ethan Uslan is a 3-time winner of the World Championship Old-Time Piano Playing Contest. An authority on ragtime and early jazz piano styles, he has performed across the United States and Europe and starred in the documentary film The Entertainers (2012). By the Sea is his third disc for Rivermont and features a divers. 'Fur-Elise in Ragtime' for 4-Hands! Ethan Uslan & Emily Jarrell Urbanek, piano Sheet music for sale here. 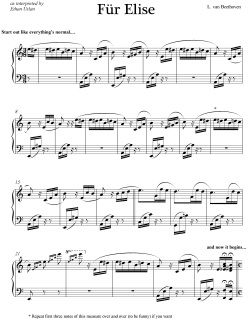 Hailed by the Chicago Tribune for his 'vivid musical imagination' and 'deep understanding of far-flung performance practices,' Ethan Uslan is a ragtime/jazz pianist and raconteur. He is a 3-time winner of the World Championship Old-Time Piano Playing Contest (yes - that really exists!) and has performed all over the USA, including at the Ravinia Festival, Scott Joplin Festival, and on NPR's A Prairie Home Companion. He has also performed in England, Ireland, Switzerland, Netherlands, Belgium, France, and Cyberspace, where his jazzed-up Für Elise has gone viral.
Aside from solo work, Ethan has appeared with symphony orchestras, jazz bands, improv comedy groups, and even a clown show. At the age of 9, he began studying classical piano with Faina Litenzon in his hometown of South Orange, NJ. As a teenager, he took jazz piano lessons from Dan Crisci and in college (Indiana University) he studied classical piano under Edmund Battersby. Ethan got a master's degree in historical musicology (also at Indiana University), and his most important mentor in that field was jazz historian Jeffrey Magee, who has written books on Fletcher Henderson and Irving Berlin.
Ethan Uslan currently lives in Charlotte, North Carolina where he presents his music and storytelling on his very own podcast - The Carolina Shout. His concerts are filled with passion, humor, virtuosity, and a deep love for America's rich musical past. His vast repertoire includes original arrangements of Civil-War era songs, African-American Spirituals, New Orleans Jazz, 1920s Charlestons, blues, stomps, Harlem stride piano, swing, Cuban rumbas, and jazzed-up versions of classical masterpieces.